It's been a long time since we've had Christmas Dinner or Lunch in our family, opting instead to gatecrash the lunchtime festivities at my Aunt and Uncle's. However this year my brother is home from London for Christmas, the first time since 2000, so Mum thought a special meal was in order. Dinner was scheduled for Christmas Eve, which I think is not so unusual in Australia; turkey and other hot foods in the evening and seafood, salads and cold meats on Christmas Day. 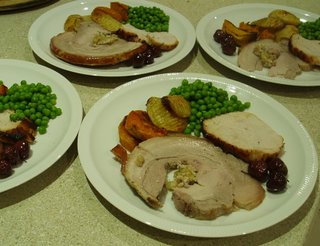 For the pork, we stuffed a boned loin with a yummy mixture of macadamia nuts, fresh breadcrumbs, pancetta, parsley and horseradish cream. The end result was a nutty stuffing with a tangy kick from the horseradish cream. Mum has recently renovated her kitchen, so she was very excited to put the new oven to the test, cranking it up to 220 degrees for maximum crackling. You would appreciate her excitement if you knew that our old oven was so useless that roasts were done in the microwave.

(No kidding, and not really as bad as it sounds...a bit of garlic and basil and roast lamb used to turn out pretty good, all things considered.) 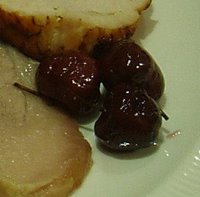 The cherries were a great touch with the pork as well. Family friends of ours often give us a box of cherries and sometimes it's hard for the 3 of us (4 this year, although brother doesn't eat cherries) to get through them all. Last year I pickled them, according to a recipe from Stephanie Alexander, and we cracked them open this year for Christmas. They were lovely and sweet with a hint of cloves infused in the vinegar, making them perfect with the roast meat. Other cherry recipes have not gone so well, such as 2 years ago, when I soaked cherries in vodka and sugar. We opened those this year as well and boy, there was a whole lot of alcohol and not a lot of edible. If anyone has any recipes for cherries, I'd love to hear about them in the next few days.

Our turkey was roast turkey breast. Again, being only small in number it's hard for us to get through a whole bird. The sides were nice and simple, roasted alongside the meat. Mum cooked hasselback potatoes - desiree potatoes cut in half and then scored at 5 mm intervals. I called them potato bugs earlier because I think they look like little seafood bugs once they've been roasted. They were very crispy and great drizzled with the pork gravy.

Finally, after main we had ice cream instead of pudding. Brother doesn't like plum pudding so instead we had malteasers and hazelnut icecream. The malteasers were all crushed up in the 2 layers of vanilla, with the chopped hazelnuts in the chocolate. The malt made the vanilla layer nice and chewy, a new texture as far as icecream is concerned. 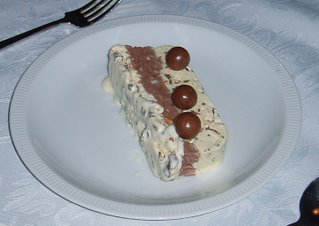 So all up, a pretty good Christmas Dinner I'd say. Of course on Christmas Day we headed down to gatecrash the seafood and beer at my aunt and uncle's.