A cheese workshop? No, not getting all messy making the stuff and washing and turning it, that’s left to Ryan Andrijich, our cheese leader, and his team. Our job was to taste, listen and learn. S’bo’s family bought us both a voucher for a Cheese Workshop at Richmond Hill Café and Larder as a Christmas present. The information sheet included words like “informal guided cheese tastings”, “benchmark examples of our matured cheeses” and “about cheese and wine matching”. Needless to say, when we fronted up to Bridge Road, my mouth was watering.

We turned up 15 minutes early for a complimentary glass of bubbly, an excellent way to shift from work to food. Warm attire is recommended and for good reason, as the cheese room was a cool 14 degrees, or thereabouts. What follows are my tasting notes, how the cheeses compared to my preconceptions/existing knowledge (which will reveal how little I actually knew about cheese) and the information given to us by Ryan. 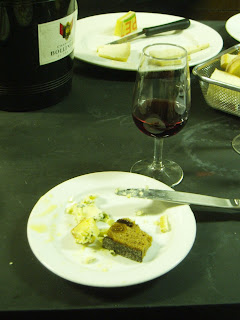 First up were fresh cheeses. I’ve never taken much interest in Ricotta one way or the other, it was just something handy to put in tiramisu. Mungalli Creek Biodynamic Ricotta changed that! From QLD, this ricotta is made from full milk, which Ryan tells us is rare. Commercial products are made by extracting milk solids and as a by-product of other cheeses. Mungalli Creek is like the first press, or extra virgin olive oil version of ricotta, resulting in a creamier product perfect for dessert cooking. Baked figs anyone?

Holy Goat! The next cheese was good! Holy Goat La Luna Ring had a texture I wouldn’t normally associate with fresh cheeses, a little harder than expected and it seemed to break away almost like fresh coconut when bitten. Our notes said a “citric creaminess” and “nuttiness on the palate”. I was more interested in the crinkly mould, called Geotrichum, which was thin and subtly tasting. The cheese inside didn’t seem influenced by the mould so much, apparently a result of it being made as a ring not a tiny cheese, which is also available.

Prior to going to the class, if I had to pick a favourite style of cheese I’d have chosen white moulds. We compared an Australian white mould, Alcharinga to a French, Brie de Nangis. The Alcharinga was “camembert style” which is testament more to its shape and size than its taste (Camembert cheese should be no bigger than 12 cm diameter). Alcharinga was really distinguished by its strong, thick rind. I found the cheese inside quite mild in comparison. Brie de Nagis was a bit stronger than Alcharinga, especially in the back of the mouth. Our notes said vague mushroom characteristics and “steamed cauliflower which rich cream” which was surprisingly true. 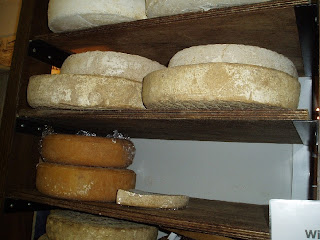 Endangered cheese anyone? According to Ryan, Taleggio, that beautiful cheese that conjures up images of rich Italian food and red wine, may soon be affected by global warming. The very unique flavour of Taleggio is a result of cave maturation, drawing unique characteristics from surrounding snow. As the earth heats up, the snow may melt, forever changing the nature of the caves and the resulting cheese. Once you taste the cheese from Lombardy, Italy, you’ll be very motivated to cut down your greenhouse gas emissions. The other washed rind we tasted was Pont L’Évêque from Normandy, France. Imports from France are apparently meatier than those from Italy, which have more yeasty tones. Whilst I hadn’t heard of it before, Pont L’Évêque must be the cheese of the month as I’ve since seen it on offer at Dogs Bar, St Kilda and Albert Park Deli, within a weekend.

I was keen to try Rochefort, as there’s been so much hype about an unpasteurised cheese being available in Australia. Unfortunately it wasn’t on the evening’s menu, but we did get to try a different raw milk cheese, Marcel Petite Comté, which was actually my favourite of the evening. Whilst not pasteurised, the milk is heated up to 60°C before the cheese is matured in caves or old underground forts. It had a very nutty taste and I can’t wait to try this cheese again, my mouth is watering at the thought. The other hard cheese we tried was Tomme de Chevre. Interestingly Tomme indicates that milk is sources from several herds in an area and the cheese is made by a professional cheesemaker. This apparently results in a higher quality cheese. The flavours of the cheese were quite delicate compared to the Comté, salty but with a very smooth aftertaste. 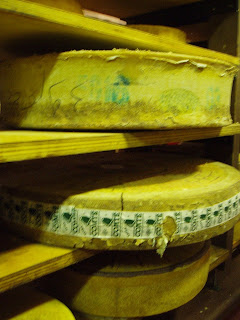 And finally, to finish the night with a bang, we had some Blue Cheese. Here we got to try an alternative to Rochefort, Bleu de basque. We also had Colston Bassett Stilton (S’bo’s favourite) and washed it all down with a glass of Moscato. Our tasting notes had many descriptive words for these two; “intense syrupy” and “yeasty vegemite” for the Stilton and “nutty texture” and “sweet floral aftertaste” for the Bleu de basque, however I was too blown away by the complexity of these cheeses to come up with many specifics. There was just so much flavour in one bite. Importantly, we were still learning even this late in the evening. For instance, I wasn’t aware that blue cheeses are pierced by needles in order for the mould to grow in “veins”.

I was bursting with information by the end of the night, not to mention cheese. I refrained from eating too much bread so I didn’t get too full, which was lucky considering how much cheese alone I ate. Ryan’s knowledge was overwhelming at times, which only reinforced the fact we were being taught by someone passionate-always a plus. Whilst it was up to the individual to absorb as much about each cheese’s characteristics as they wanted, other information was provided in handy, take-home sheets. I did find it hard to keep up at times, but that’s not a problem really, just more time to concentrate on eating the cheese.

Richmond Hill Café and Larder has a few different cheese-themed workshops, including one more focused on matching cheese and wine. Importantly the cheese and wine workshops doesn’t look at quite as many cheeses as the cheese workshop alone. So if you’re keen to go make sure you choose the right course depending on whether you’re more into cheese or more into wine. Personally, I’d take the cheese!

How Red is My Beetroot!

I’ve never cooked with beetroot before and since I love it, both tinned and fresh, I thought it was time I tried. There’s nothing like chunks of beetroot in salad and I don’t think a burger is complete without a slice, even if it is tinned.

Last week I was flicking through my Fabulous Food Cookbook, a low-fat cookbook I picked up when I used to work for Fernwood Women’s Health Clubs. The recipes are quite yummy, although that’s probably because I usually skip the low fat options (evaporated milk in carbonara anyone?) and replace them with the real thing (mmm, cream). I came across a cucumber, beetroot and mint salad, so next trip to South Melbourne Markets included a couple of bunches of beetroot. 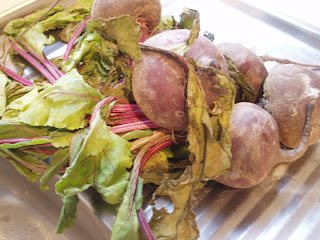 I find grating foods labour intensive, yet I always pick recipes that require things like grated zucchini, citrus zest and so on. Grating beetroot adds another dimension. Red fingers, red hands, red bench-tops, red everything! Not surprising, but there you have it. I trimmed and peeled and grated my way into a big red beetroot mess. Was the salad worth it? Probably, but that’s only because I managed to keep my clothes clean.

Other ingredients were 1 large cucumber, 1 red onion (although I used half and this was adequate), a tsp of salt, 2 Tbsp finely chopped mint, 1 tsp lemon rind (grating, again!), ½ cup lemon juice and 1 tsp sugar. Once the beetroot was grated and the chopped cucumber was salted and rinsed all that was left was to toss everything together.

S’bo, who’s also just relocated to Melbourne, and I ate the salad with some delicious lamb chops and natural yoghurt. The lemon flavour was a little too strong so next time I’d probably cut it back a bit. Overall I’ve tasted better beetroot salads, usually ones with nice, fatty chunks of goats cheese, although I very much enjoyed the leftovers for lunch the next day. 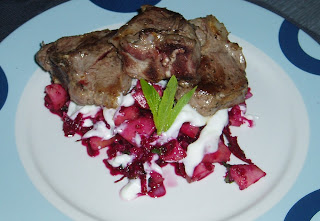 The beetroot fiesta didn’t stop there; I roasted the leftover beetroots the next night. I much preferred wrapping them in buttered foil than grating, although I think I could’ve washed them a little more thoroughly. I’m sure that faint earthy taste shouldn’t be there. I guess I’ve still got a little way to go when it comes to beetroot cooking, but something tells me I won’t give up just yet.
Posted by Ali-K at 5:21 pm No comments: Links to this post