Having been in Canberra for most of the month, I've missed out on the majority of Sydney Good Food Month happenings, relying instead on the drool-worthy descriptions of other bloggers to keep me informed (see Cucina Rebecca for a wrap up). 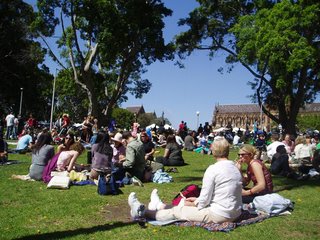 I was lucky enough to be in town this weekend and I felt blessed that, out of all events, the one that I could go to was the Sydney Food and Wine Fair. Having Sydney's great food in one location was just too good to pass up. So on sunny Saturday, vouchers in hand, we wandered the stalls, doing a quick reconnaissance before settling on our mains. Having never been to Sydney Food and Wine Fair before I was overwhelmed by the smells and sounds of yummy food cooking. Drawing huge crowds were the berry and mascarpone tarts from bills, which I vowed to come back to after mains, barbecued quails with chilli and lemon from Lucio's, and high tea from The Tearoom, QVB.

Finally I settled on the Baluchi Lamb Salad from Oh Calcutta.... 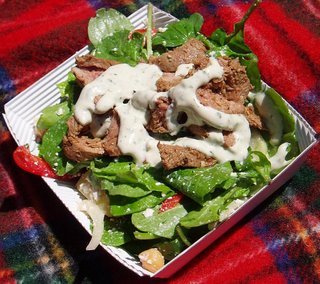 This was another popular stall and I had to wait in line for a little while. I can't tell you exactly how long as I was too busy munching on the complimentary sweets. So busy that I can't remember what the sweets were actually called. Payasa springs to mind, although a quick wikipedia search tells me payasa is an Indian sweet made from rice. These sweets were like little cubes of turkish delight, complete with rosewater.

Having eaten sweets before my main meal, I was keen to sit down and devour my salad of spring lamb, preserved lemons, paneer, chickpeas, tomato, baby spinach, rocket and sumac, all topped off with mint chutney. The lamb was cooked a little too much for my personal liking but was tender enough to still be delicious. The sumac was very subtle and I only came across 2 specks of preserved lemon, leaving the mint chutney solely responsible for bringing out some interesting flavours. Luckily, it did. I've never eaten paneer before and, combined with the chickpeas, it added quite a bit of bulk to my salad, by the end of my meal I was feeling rather full and satisfied.

Two more diners from my picnic rug, S'bo (the boyfriend) and N (from the 'worth) both settled on the nicoise salad with herb crusted salmon carpaccio from Scolarest. 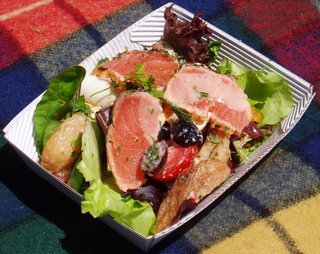 From the little nibbles that I stole and the comments made by S'bo and N, this was a very refreshing salad, although S'bo believed the salmon had been frozen and wasnt entirely happy about it. Being on the eating side of caterers and rarely the preparation side, I'm not sure if this is standard practice, but we both decided it was a consequence of such a large scale picnic. S'bo did concede that it made the salad beautifully cold and he enjoyed it nevertheless.

By the time we had eaten we were too full to think about dessert, meaning we missed the 2 o'clock deadline, preferring to lie in the sun rather than deal with the crowds. The berry and mascarpone tarts looked so good, I'm sure someone out there can testify that they tasted good too! 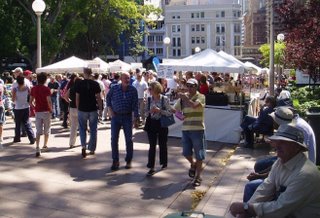 Whilst I wasn't prepared for the crowds, I had a great time choosing my lunch from some of Sydney's best restaurants, supporting The AIDS Trust of Australia at the same time. Thumbs down to the passer-by who we overheard say "puh-lease...seafood risotto, I can make that at home" and thumbs up to the Queens who performed crowd control. It was such classy way to keep everyone moving in the right direction with smiles on their faces.

With less than a month before the Melbourne move, Sydney put on a pretty good farewell picnic....

I've been talking about starting a food blog for nearly 3 months now, which is a long time to be all talk and no action. So when I created my blog yesterday my first instinct was to wait until I actually moved to Melbourne before posting, especially considering my idea was for a kind of new - to - Melbourne food guide. But that's still more talk and still no action isn't it? Like saying you'll start going to the gym next week. So here it is, the first posting.

It was my turn to cook in the share house last night and to be thrifty I used up some sausages left over from the weekend's party. This is where the unglamorous part comes in. There were no gourmet sausages, no lamb and rosemary or tomato and garlic, just humble coles BBQ sausages. I often tell my workmates what meals I have planned and yesterday many turned up their noses at curried sausages. But these were Thai curried sausages. 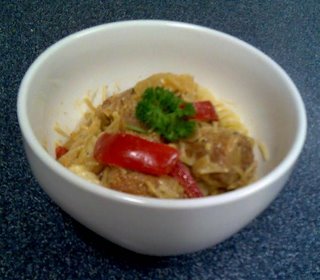 What made them Thai was some red curry paste and coconut milk. I wont include the recipe, but imagine you're cooking a humble red curry with sausage chunks instead of chicken or beef strips. Stir in a little powdered french onion soup and follow with the standard red capsicum and coriander and you're done! (And yes, I admit it, that's parsely not coriander in the picture and I did serve it with some pasta floating around the cupboard instead of something a little more Thai. As I said, it was a meal of resourcefulness.)

I feel like my first posting should be short and snappy so people don't get bored by this new kid on the block, but the dubious beginning doesn't stop there. Last night I also tried to finish making some brownies that I had begun on Sunday. I'd mixed the dry ingredients but stopped when I realised I had no eggs. I resumed last night by adding the wet ingredients to the dry and it was only as I was scraping the mixture into the tin that I realised this brownie had left behind it's sugar. It was a very close call and I spent the next 5 minutes kneading the sugar into the mixture. I do like baking, but I'm quite prone to baking disasters.

I'm sure I will blog about many more in the future!