It's official, I have now abandoned my blog for over a month. Four postings and then.....nothing.

Unfortunately the move to Melbourne has involved less food and more stress than I had anticipated. Nevertheless, I'm back. I haven't failed to take photos of some of my eats, I've just failed to post them. So hopefully over the next few weeks I can start putting up some of those photos as well as food goodies that I'm sure to eat over Christmas. Lets just hope that I can remember exactly what the photos tasted like.

AO'B, a good friend of mine from Sydney, gave me the Entertainment book for Melbourne which I hope to put to good use. Combined with The Age Good Food Guide, given to me by my colleagues in Canberra, I think there's some serious eating to be done. 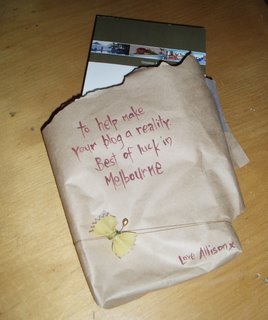 Already I've dined at EQ Cafe Bar at the Arts Centre, Mr Wolf in St Kilda and stacks of cafes along the way. I've also had my share of cooking disasters whilst trying to self-cater in my little serviced apartment, with only one frying pan and one saucepan.

Hopefully I can post all about my first few weeks shortly...Thanks for not losing faith.
Happy Christmas eating!
Posted by Ali-K at 8:52 pm No comments: Links to this post 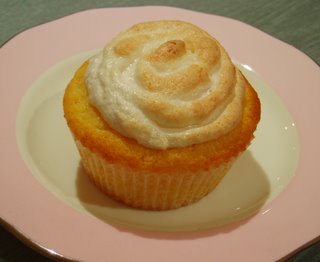 As my moving plans get started, I've had less and less time for cooking. Lemon Meringue Cakes are the latest thing that I've cooked in my Canberra kitchen and they'll probably be the last.

I made the recipe, from Women's Weekly cupcakes, for friend BA, who is obsessed with citrus based cakes and desserts. Spoonfuls of tangy lemon curd sit in the top of the cake, before being covered by meringue. Whilst B liked the curd best (of course), I liked the coconut, which gives the cake lightness and is also in the meringue.

I've previously mentioned baking disasters (An Unglamorous Beginning) and this attempt was no exception. I started with the curd, but trying to cook an evening meal and the cupcakes concurrently quickly led to problems; the curd went lumpy and there was no saving it. I try and have double the eggs I need for instances just like this one, so I was able to start again. However this time I used Stephanie Alexander's lemon curd recipe and it was much simpler. She makes some interesting points about lemon curd, having debunked the theories that unless you make it in a double saucepan it will curdle and if you leave it uncovered it will form a skin. Apparently not true! 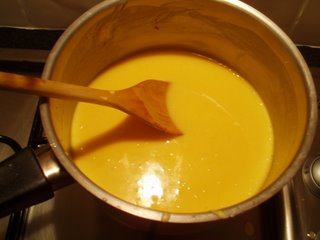 So here is the recipe:

Beat butter, rind, sugar and eggs until light and fluffy, stir in milk and coconut then sifted flour and divide between 12 standard muffin cases. Smooth surface and bake for 20 minutes in 180°.

I mentioned earlier that the coconut in the recipe is great. I think if you substituted the lemon rind for vanilla essence, this cake recipe would work well for cupcakes with any toppings.

Whisk egg yolks and sugar until well combined but not frothy. Tip into a saucepan and add the remaining ingredients. Bring to a simmer point over medium-high heat, stirring constantly. As soon as bubbles appear remove from heat, still stirring. Allow to cool.

To assemble the cakes, cut a 2cm deep hole in the centre of each cake and fill with the curd.. Pipe meringue onto the top of each cake and bake in a hot oven for 5 minutes, or until meringue is browned lightly.

Tagged with: cupcake, cake recipe, lemon meringue
Posted by Ali-K at 10:55 am 4 comments: Links to this post

Tuesday night brought new experiences for my workmates and I, in the form of a staff dinner at Kingsland Vegetarian Restaurant. With the exception of Badde Manors Cafe in Glebe I don't think I've been to a wholly vegetarian restaurant. It's not that I'm anti-vegetarian food, I just don't have many vegetarian friends to lead me there.

The menu reads like a conventional chinese restaraunt, categorized according to appetizers, soups and vegetables, tofu, seafood, chicken/duck, beef/lamb/pork and curry dishes. 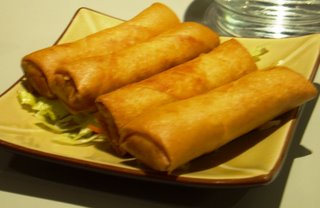 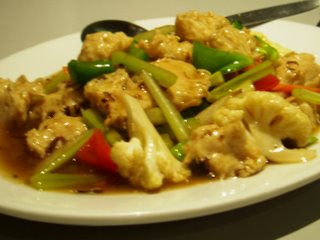 Next to hit our lazy susan was the Ginger Chicken, and I was quite impressed. It really did taste like chicken. The texture was a little off but the taste was right on the mark. The dish as a whole came together well with a good helping of ginger in the sauce and a bit of a crunch to the veges.

After the Ginger chicken, we were presented with Sizzling Mongolian Lamb on Hot Plate (top) and Roast Duck (bottom). 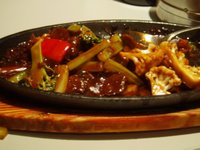 The texture of the lamb actually was like the texture of meat, but the taste was something else. Both the lamb and the duck had an aftertaste that reminded me of burnt sugar. Initially I thought it was

the sauce, but both dishes had the same characteristic. Strange.

I thought the texture of the duck was quite like eggplant. We had ordered Pan Fried Eggplant cooked in delicious spicy sauce and I had to clarify if we actually were eating the duck, or the eggplant. We also ordered two other vegetable dishes, Mixed Vegetables with Satay Sauce and The Bird's Nest. I only tasted the bird's nest, and it was great. Capsicum, corn, broccoli, cauliflour, cashews and minted peas were served inside a shredded potato basket. The minted peas really added extra flavour to the dish, it was definitely my pick of all that we ate. 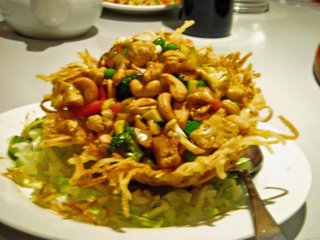 My least favourite dish was the Crispy Honey Fish. Seaweed paper was used to simulate that fishy taste, but it was a little over the top for me, I didn't even bite enough to comment on the texture. The crispy honey part was good though, so sticky and sweet that it stuck to my teeth. 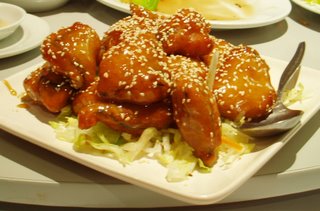 And then somewhere in the middle was Crispy Spare Ribs in sweet and sour sauce. I was disappointed that this dish didn't come out on little wooden bones, like the chicken drumsticks, but otherwise it was fairly stock standard sweet and sour pork; a nice tang in the sauce and not a whole lot of (mock) meat inside the batter. 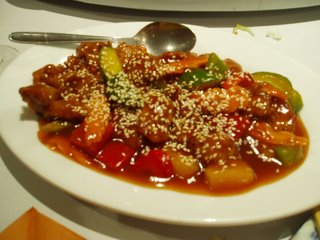 Would I go back? Probably not, the food and service weren't any better than what you'd find in a standard Chinese takeaway, so I'd probably stick to meat-based meals. But I could be tempted to try mock meat again (maybe not mock fish).