Taste of Melbourne hit the Carlton Exhibition Building with style over the weekend, not hard to do when inside the walls of such a beautiful building.
Having not been to Taste before I was expecting jostling crowds and fierce competition to try the "it" dish, enter the Gourmet Traveller kitchen or snap-up the latest samples. Instead, I was surprised by the easy-going crowd, possibly the result of the copious quantities of wine flowing from every corner. I hope the exhibitors sold a few bottles because they certainly dished out their fair share of samples. We enjoyed the offerings from Dalwhinnie and Pizzini, as well as the broad range at Wine Selectors.
I had carefully planned my menu (thanks to Taste publishing the selection online), only to be disappointed by Mezze Bar and Grill running out of Pork Cheek (instead check out the description at Melbourne Gastronome). Disappointment turned to frustration when, having returned later for Cavatelli di Messini with Prawns, Peas, Pecorino and Lemon oil, I was told the snaking queue was waiting for pork. The assistant apologised profusely for not telling me there was more to come. Luckily I was in a pretty jovial mood by this stage and the pasta was fantastic. I dubbed it Macaroni and Cheese for Grown-Ups. 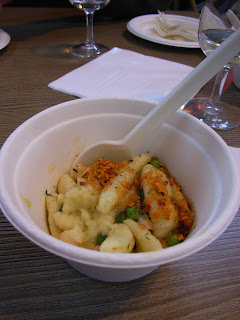 Keen to try the Hopkins River Beef due a family connection, S'bo's Mum purchased the Seared Hopkins River Beef with shitake and aged soy dressing from maze Restaurant and maze Grill. A cool dish, thanks to the logistics of the whole set-up, with tender slivers of beef doused in sesame oil that showcased the produce perfectly. 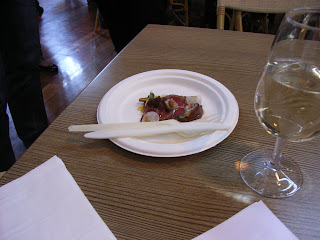 Unable to stop there, we tried Duck Rilletes from Libertine, with a subtle blend of flavours that allowed the smokiness to come through, and Seared Kingfish, Red Curry and Puffed Rice from Charcoal Lane. S-bo called the latter "a cold fish curry", an uappetising name that doesn't do the dish's spice and delightful coconut foam justice. Perhaps the best value dish was maze Restaurant and maze Grill's seared marlborough salmon with warm sweet corn and potato salad. Like the beef this was a prime exmple of allowing quality ingredients, in this case Salmon, to speak for themselves. 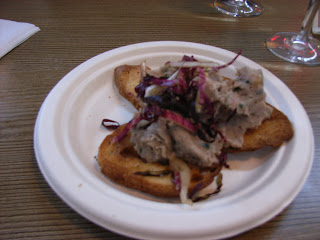 Dessert was a vanilla tapioca pudding from Longrain that reminded me I'm not a fan of jackfruit. Light on vanilla but heavy on coconut milk, this was a complex dessert that called for a few spoonfuls before your tastebuds could adapt. 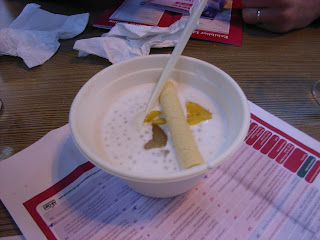 For more desserts we hit to exhibitors. Avoiding the long Ben & Jerry's queue we tried delicious Gundowring from the Kiewa valley and Movenpick. Charmed by the producers, the former won our hearts.
The other highlight of the day was catching Nicolas Poelart from Embrasse in the Taste kitchen. Unassuming yet passionate about his food, the Frenchman charmed most of the audience. Personally I enjoyed the plants that were handed around, showcasing the benefits of foraging if you know what to look for. Nibbling on some borage I was astounded to discover that it really does taste "a bit like oysters"!
Overall, a great way to spend Saturday afternoon munching on goodies and chatting to producers, chefs and punters alike.
Posted by Ali-K at 2:30 pm 4 comments: Links to this post